Join the Ladies of Rick's for the Big Game! $100 Bottles of Tito's and other select bottles all night! The Sports Bar will be open and serving up a free...Reserve My Place

The Big Game at Rick's! 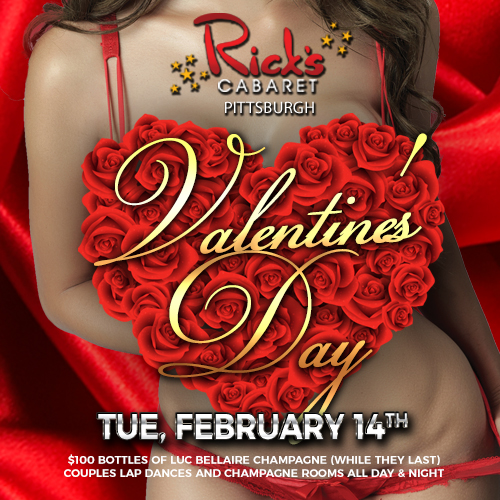 Come spend Valentine's Day with the Ladies of Rick's Cabaret Pittsburgh! Couples Lap Dances and Champagne Rooms are on all day and night! $100 Bottles of...Reserve My Place

Rick's Cabaret Pittsburgh, formerly Blush, is the most exclusive club featuring the most beautiful women performing nightly. Voted Pittsburgh's Best & downtown's only Gentlemen's Club, Rick's hosts nationally known feature acts and the areas' most beautiful dancers. Rick's Cabaret proudly holds the top spot as the best strip club destination in the steel city, boasting plenty of credentials to validate its claim. Rick's Cabaret has won the Pittsburgh City Paper’s “Best Strip Club” multiple times. On a national level Rick's Cabaret, formerly Blush, won ED Publications: Club of the Year East 2016, has been listed in the Exotic Dancer’s top 100 Clubs in the country and is nominated once again for Overall Adult Club of the Year 2018. In Pittsburgh, PA “Everyone Ends Up at Rick's Cabaret”. Located in the Cultural District, Downtown Pittsburgh, an easy walk from the Convention Center, Stadiums, Hotels, & Restaurants. Find us at the corner of Penn Ave & 9th street.

A $300 tab for drinks and food of your choice. VIP table on the main floor. Complimentary admission up to 5 guests. Free basic mixers. Personal VIP host.

An $600 tab for drinks and food of your choice. A VIP table in your prefered section. Complimentary admission up to 10 guests. Prioritized seating. Basic Mixers. A personal VIP host.

We encountered the following error while processing your reservation:

If you continue to have issues completing your reservation, please contact us at (888) 765-6768 or click on the "LIVE CHAT" button below to speak with one of our support specialists.